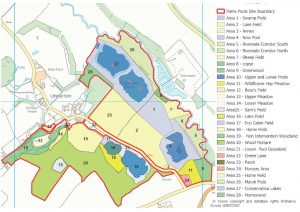 I built the stable block in 1986 and apart from being used by my horses and pony, the 3 stables are extremely useful for dealing with my 7 Shropshire sheep and their lambs & for rearing chickens & ducklings. A friend hatches out chicks & ducklings in their incubator but I then have to keep them under cover until they are big enough to survive in Fort Ducks without being eaten by rooks or crows. Previously my hens & ducks hatched out their own eggs but they were rather unreliable about it & I had to buy ducklings & ex-battery hens periodically.

The stable block also comprises 2 adjoining storage areas, each the size of a double garage. One is used to store hay, feed & bedding for the animals. The other is used for general storage with my Kubota tractor the most important item. Behind is the cold store where I keep 2 small deep-freezers. I fill them with home-grown fruit & vegetables; with the lamb and poultry that I produce and with Canada goose, pheasant and venison shot mainly on site.

I bed my horses on shredded cardboard. It is easier to handle than straw or wood-shavings & much better for the gardens. Contrary to popular belief, I find there is seldom any need for it to be “well-rotted” first: I put it on as a mulch in the autumn & dig it in, if necessary, in late winter or early spring after the frosts have broken it down [ I would not use it in the flower beds].
I also plant my Pumpkin seedlings directly into the main muck pile in early summer as the rising warmth of the rotting muck & its moisture retaining properties mean that they yield good crops with minimal, if any, attention.
The muck pile is also conveniently sited for friends who want some of the well-rotted product after the pumpkins have been harvested.The horses are my major indulgence, although they do provide me with an ample supply of useful manure. They are usually in the Horse Field, which has a field shelter for them. I try & keep them out as much as possible as it is obviously more work to keep them in the stables. However if I think the weather is such that they would prefer to come in, there is a wicket gate leading from their field to the stable yard, which I can open to give them the choice. 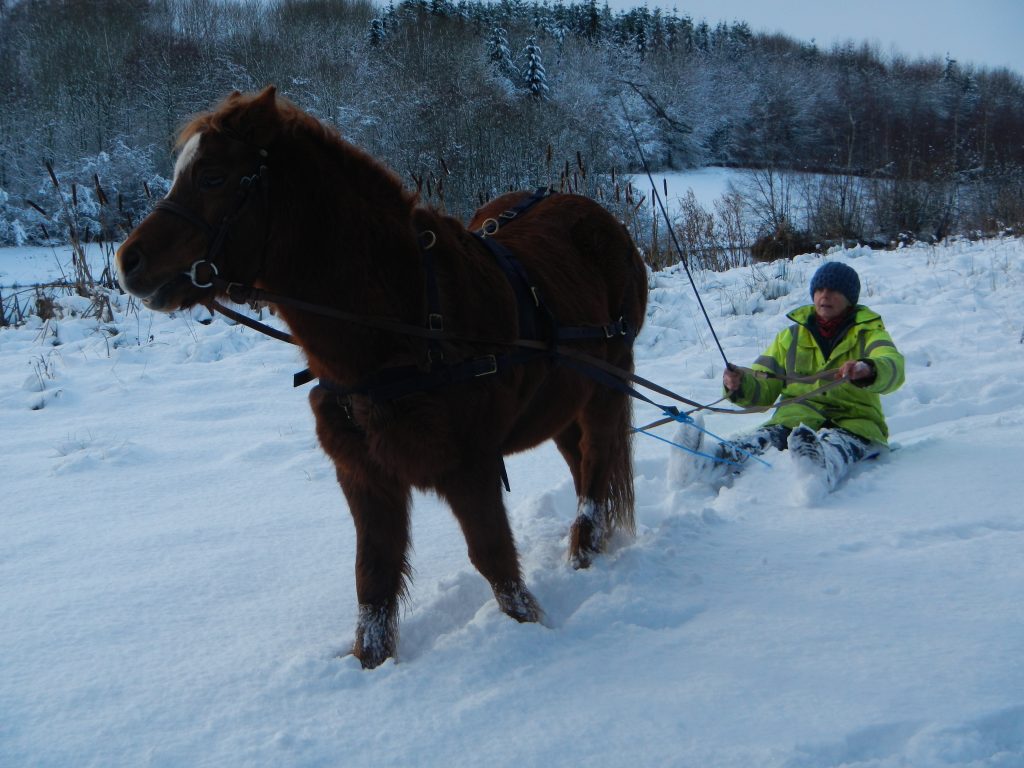 I acquired the pony in February 2015 and am having great fun with him, as are a friend’s grandchildren.

There is the 5 acre Horse field, Lower Pool field, two wildflower hay meadows, the new “Home Field” and four smaller fields on my land, more than enough for my two riding horses, the pony & my Shropshire sheep. So when needed I use some Dexter cattle or the flock of predominantly Welsh sheep which belong to Jack & Archie Groves who are carrying out “conservation grazing” over the entire reserve.Shropshires do less damage to trees than any other breed of sheep and are beginning to be used in commercial fruit orchards, instead of the appalling use of herbicides to produce bare earth under the trees. I’ve used them successfully to graze my four small orchards although one does have to watch them, ready to remove them at the first sign of tree damage. 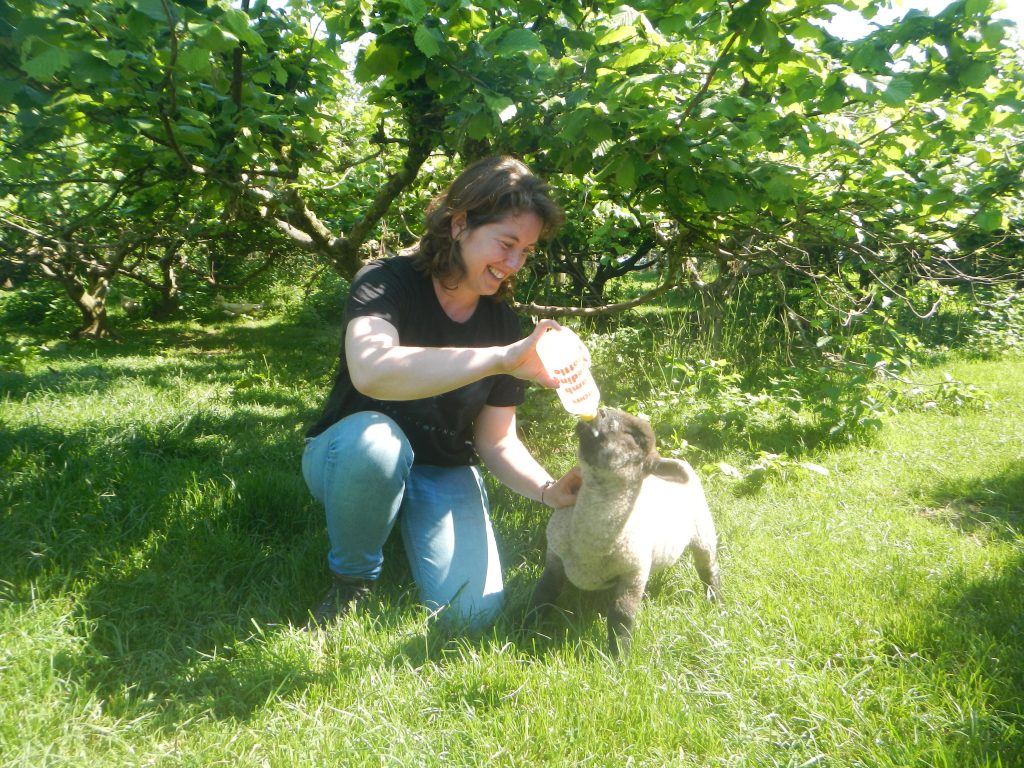 In my woodland there is a perennial problem with rampant bramble & bracken encroaching, particularly along the sides of the numerous paths & into the woodland glades, smothering the woodland wildflowers. I used to mow these areas using my tractor & flail-topper but this was obviously undesirable in that it used fossil fuel &, in any case, much of the ground is too steep & uneven for even my sturdy 4 wheel-drive tractor.Jan’s management plan has divided this woodland into two. One part will be left untouched, except for a single path which will be mowed as needed to provide access for inspection. The other part, together with Lower Pool field, will be lightly grazed with Dexter cattle, after trialling this very successfully from the winter of 2018/19 and every year since.

In the past, I used my Shropshire sheep who did a reasonable job but the Dexters have been far better. They eat the longer grass, which the sheep do not like, and being much bigger are even better at knocking back the bramble & bracken and show no sign of damaging the trees at all.

While I manage the wood primarily for the benefit of wildlife, it is a source of fuel for my log-burners; blackberries ; sloes for gin ; rowanberries for jelly ; elder flowers for cordial ; wild cherries ; inedible chestnuts [ I keep hoping !] & dubiously edible fungi.A regime of regular hay-making followed by aftermath grazing is developing Lake Field & Wildflower Hay Meadow into traditional species-rich wild-flower hay meadows. This is resulting in lower quantities [an advantage!] of higher quality hay plus the restoration of a beautiful and seriously threatened habitat – 97% of the old wild-flower hay meadows in the UK have been lost. In 2016 Wildflower Hay Meadow was started off by strewing with “green hay” & yellow rattle seed from good local sites. Lake Field already had a small patch of yellow rattle and a number of the “indicator species”, including Common Spotted Orchids and hay was first made there in 2015.

The Dexter cattle are currently used over all the SWT owned land, except the “Copse” which is left untouched. Later they will be withdrawn from Riverside Corridors north & south, at least temporarily, as SWT plans to plant these areas with clumps of native trees.The Welsh sheep are used in Lane, Sheep and Home fields and on the leased land where conservation grassland is to be restored around the two Conservation Lakes. 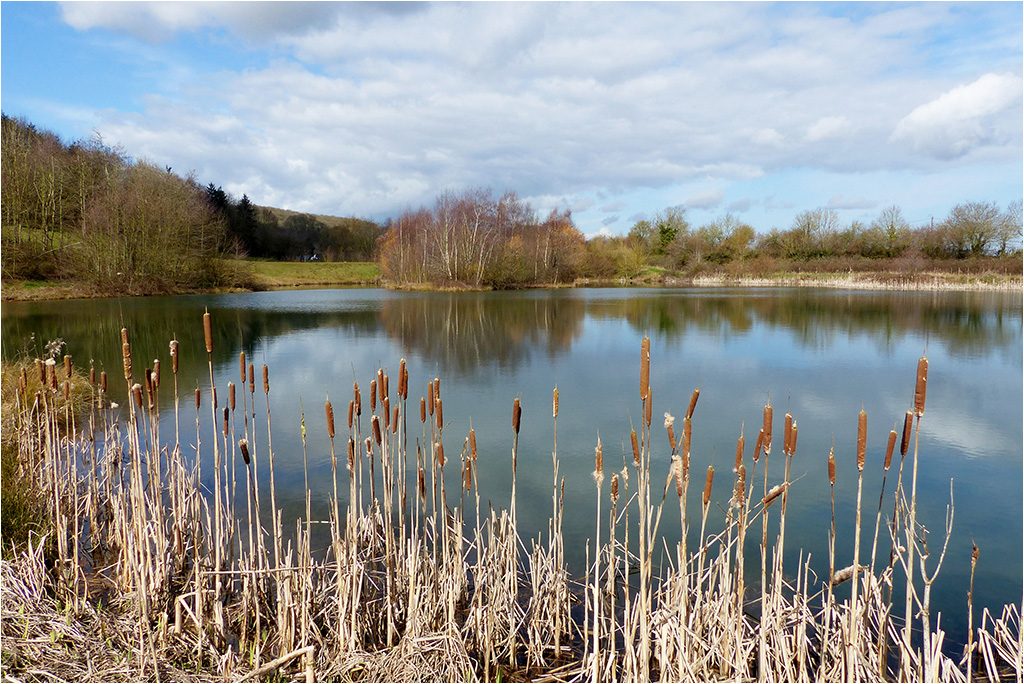 A few years ago, I found American Crayfish in both my pools. This is ecologically extremely undesirable & “it is one’s duty to eat them to extinction”. So I got a crayfish license & 3 traps. The traps work on the lobster-pot principle & are best baited with dead squirrel, magpie or similar. I submerge them near the rocks of the bottom lake for 24 hours & then remove any crayfish caught & put the still-baited traps back a second & third time. I put the crayfish in a holding pen in clean water for 24 hours to cleanse them before killing them & enjoying delicious meals. 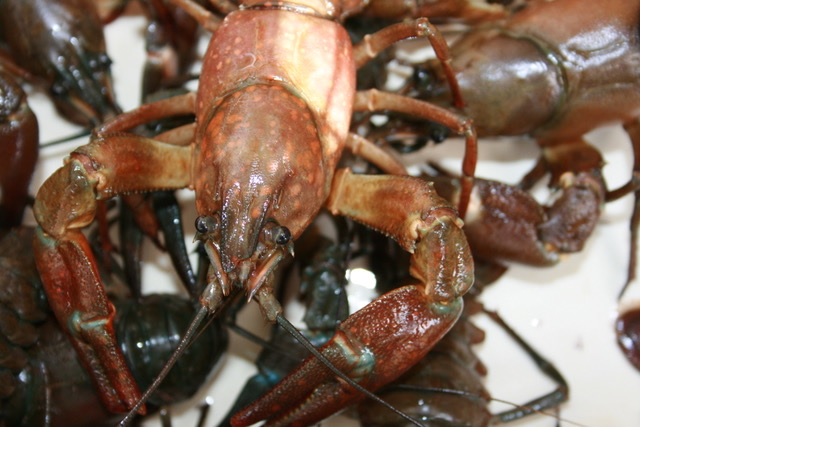 This results in large quantities of crayfish shells which I crush by putting them in a tough plastic bag & then stamping on it. The resultant fishy grit is extremely popular with my chickens & is very good for them.
This seems to me a good example of a Permaculture solution to an ecological problem!Piles of crayfish shells on the edge of the bottom lake suggested that otter were also doing their duty and the Wildlife Trust have since managed to film them.

I would like to find more environmentally sustainable & locally produced feeds for the animals.
The dog & cat both have commercial dried biscuit, probably not produced in an environmentally sustainable way.
My dog also loves raw squirrel & rabbit but the cat will have none of this.The horses & sheep mainly eat grass and my own hay with a very little hard feed of dubious origins.
The poultry have lots of kitchen & garden scraps, much of it donated by kindly neighbours in exchange for occasional eggs, but they do have layers pellets as well which is not produced from local or organic sources. Alternatives need to be sought.